Today, Nemanja Miletic signed a two-year contract with Belgian D1 club KVC Westerlo. Nemanja is a strong and energetic central defender with excellent heading skills. He comes over from FK Vojvodina for which team he played 8 Europa League qualifying games earlier this Summer. We wish Nemanja all the best in Belgium! 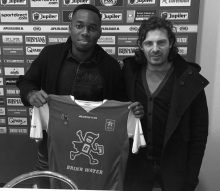 Today KRC Genk and MVV Maastricht came to an agreement to transfer the young and speedy striker Henry Odutayo (19) to MVV Maastricht until the end of the season. Henry's manager Stijn Haeldermans (Kirola Sports) is very satisfied with this temporary transfer: "Henry is a young and talented striker who will now get the time and opportunity to develop himself at a higher level by joining the senior team of MVV. I am confident that MVV is the right place to be for Henry and strongly believe that he will make great progress in the coming months. His performance will now be closely monitored by both neighbouring teams."

This morning, the experienced midfielder Emrullah Güvenç (28) has signed a two-year deal (+ option) with MVV Maastricht. After playing two years in Belgium for Antwerp F.C. (25 goals), "Superturk" Güvenç now returns to the Dutch Jupiler League where he managed to score 19 times for Helmond Sport in the 2012-2013 season. Güvenç became free of contract this Summer and was training already with the team past weeks. MVV Maastricht is coached by Ron Elsen and is currently ranked seventh in the Jupiler League. Click here to read the official press release from MVV Maastricht.

Today, on the last day of the summer mercato in England, the 19-year-old Obbi Oularé signed a five-year deal with Premier League club Watford FC. Oularé, who is also part of the Belgium Under-21 squad, came through the academy ranks at Lille (France), before moving to Club Brugge (Belgium) in 2013.

Oularé: “Moving to the Premier League is all I have dreamt of. It is the best competition and most watched league in the world. I am looking forward to train with the guys at Watford FC and to play against top teams such as Chelsea, Manchester, Arsenal and Liverpool. Thanks KIROLA SPORTS for making my dream come true!!!”