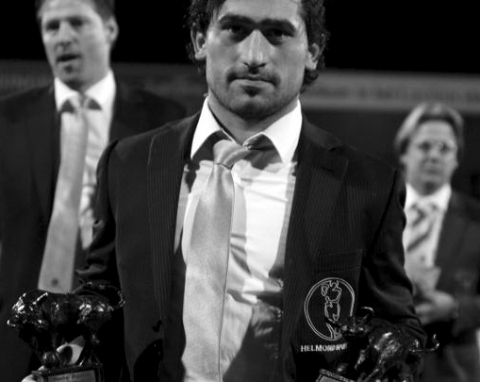 Kirola Sports is glad to announce that Emrullah Güvenç (Helmond Sport) is nominated for the Golden Bull award. The Golden Bull is each year awarded by fans, coaches and team captains to the best player of the Dutch Jupiler League (D2). Because of his excellent performance during the first period of season 2012-2013 (9 goals in 10 matches), Emrullah was given the nickname “Superturk” by the Dutch/Turkish press. Moreover, with a total of 18 goals (whereof 2 hat-tricks), Emrullah guided his team to the Jupiler League Play-Offs, where it soon will fight for a spot in the highest division. Besides Güvenç, also Jack Tuyp (FC Volendam), Joey SuK (Go Ahead Eagles), Anco Jansen (De Graafschap) and Tom van Hyfte (MVV Maastricht) are nominated for the Golden Bull. On May 6th, the winner will receive the Golden Bull from the hands of Louis van Gaal, the current coach of the Dutch national team.

Vote SUPERTURK Emrullah Güvenç Player of the Year and make chance to win a season ticket of a club of your choice!! *

To support Emrullah, Kirola Sports asks all fans to vote for him on the webpage of the Dutch Jupiler League!! If Emrullah wins the Golden Bull, Kirola Sports will celebrate this by giving away one season ticket 2013-2014 of a club of your choice.

How to vote and participate?

Step 1 – LIKE Kirola Sports’ Facebook page.
Step 2 – VOTE for Emrullah Güvenç by filling out the form on the webpage of the Jupiler League. You will now receive a confirmation mail.
Step 3 – SEND your confirmation mail to contests@kirolasports.com.

* Price is limited to a refund of max. 250EUR of the season ticket and will only be granted if Emrullah Güvenç is elected player of the season on May 6th. Winner will be announced on May 7th by email. Kirola Sports general privacy policy is applicable to this contest (http://www.kirolasports.com/disclaimer). No legal action is open against (the result of) this contest.